I finished a few projects a while ago and thought I would write about them together in this post.

You may have noticed in the pictures of the ledges I made there were a few more canvas’ that showed up. When I was filling the ledges up with different things I placed two blank 12″ x 12″ canvas’ in as place holders. Then I got to work on a few different designs.

The first one I came up with was quick and easy. I gave the canvas a solid white coat to use as a background. Then I placed strips of blue painters tape at random angles and painted over with grey. After I removed the tape I I stenciled on a W using a font that I found online. Here’s what it looked like when it was finished:

The next art that I worked on caused me a little bit more frustration. I tried to carefully measure out the lines and in the end just decided to wing it. I coated the entire canvas with white again to get the smooth, even, solid background. Then I taped off the pattern.  I cut a 1″ piece of tape in half lengthwise so I had a 1/2″ strip to use on the long strips and then I made the rest of the pattern with 3/4″ painters tape.  I painted over the tape again with grey and pulled off the tape once it was dry. Then I used a stencil I printed onto regular printer paper to make the Love and the heart shape.

The background ended up showing through the Love but I liked the way it turned out. 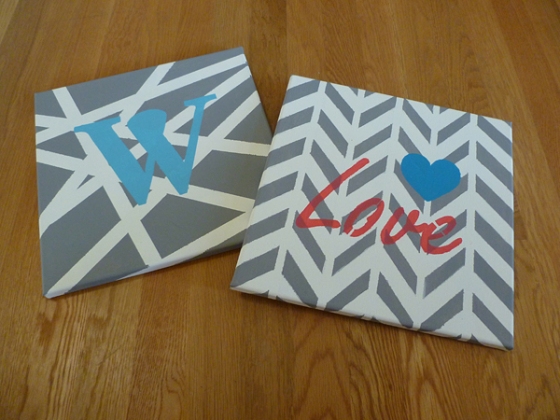 Here they are a little closer up. You might be able to tell that the lines didn’t turn out really crisp. Some of the paint bled through under the tape. Although they didn’t turn out perfect it doesn’t matter too much since they are up on the shelves and you can’t see them up too close.

Another project that I created to use on the shelves was to put pictures on wooden plaques. I found a couple of plain wooden plaques at the craft store for a few dollars a piece. Then I used acrylic craft paint to paint the background and edges of the plaques. Once the paint was dried I picked a couple of pictures and simply fixed them on with mod podge. 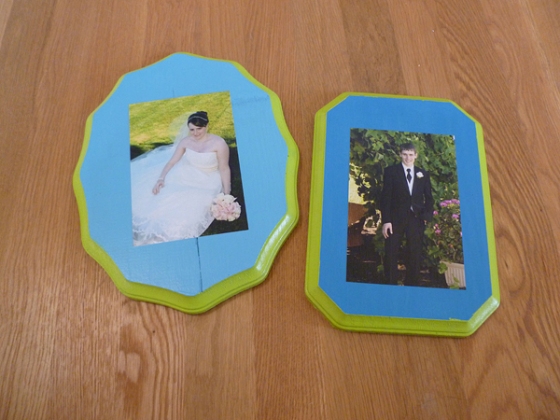 I chose a couple of wedding pictures to use and I like the way they turned out. They were quick to make add a fun pop of color to the shelves.

The last project I worked on was another canvas art. You can find all over Pintrest tutorials on how to make your own canvas photos so I thought I would give it a try. First I put together a wedding photo and added text of a song from our wedding in Adobe Photoshop. I got the idea for the picture from here:

So, after I finished my photo I had it printed as a 12″ x 12″ photo. Since my canvas was 12″ x 12″ as well I wasn’t able to wrap the photo around the edges. Instead I just painted the edges of the canvas with a black acrylic paint. Then I just centered the photo on top and used mod podge to adhere the picture to the canvas. 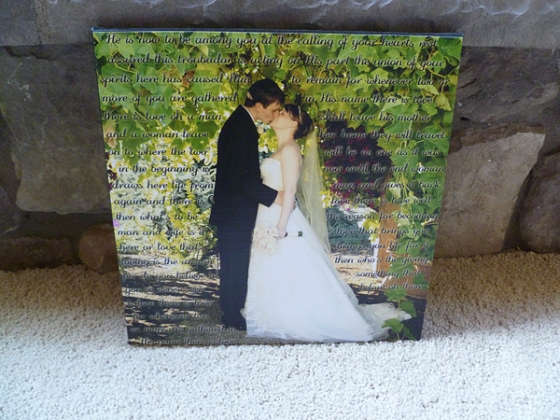 It may not look as nice as a professionally wrapped canvas photo but it was inexpensive and fun to create. This one is now in our master bedroom. It’s not much to add to the mostly empty room but it’s something.

Well there you have it a smattering of picture and art projects.

Have you been doing anything with canvas or photos lately?