I’ve been working on a roman shade for my sewing room and lets just say that it hasn’t been going all that well. It’s tedious and super intimidating for me. All this equals a project that has probably taken at least 6 months and is still going. In the mean time I decided to finally get on making the decorative curtains that I wanted for over the window.

Months back I bought an inexpensive white curtain rod from ikea. Last week I finally went into the fabric store and looked for something to make the curtains.

Since I used the curtain rings all I had to do was cut the fabric to size and finish the edges. On the sides I did a double turned 1″ hem and on the bottom and top I did a 3″ hem.

I wanted something cotton so that it would be lightweight and inexpensive.

As for the color I really wanted something that would lighten up the room as well as tie in the teal ceiling as well as include some bright pink.

I’m actually really pleased with the fabric I found. From a distance it just looks like a blur of light colors. I’m glad I didn’t go with a large bold pattern which would have been too overwhelming. 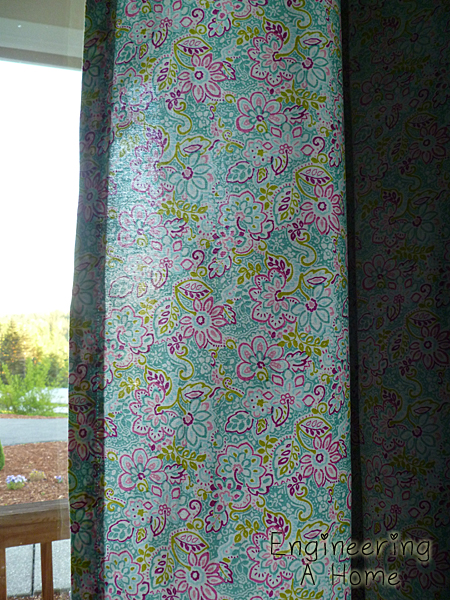 After just a few hours I had the fabric cut and hanging on the newly installed curtain rod. Now all I need to do is finally get on that roman shade.