I’ve said it before and I will say it again. Whenever we are working on a bunch of projects and I have a lot to blog about it’s hard to find the time to blog. That being said we are still working on the deck and I’ve been slipping in a bunch of little decor projects around the house I just haven’t found the time to blog them. They will come; it just may not be until the deck is done. Hopefully that’s soon.

Now back to the never ending deck saga! When we left off we finished installing the posts and beams for the deck.

The next step was to install the joists. For the first level or “step” we precut all the pieces and nailed them together using the nail gun. It was definitely nice to be able to use the nail gun and quickly put things together after all the hammering on the beams and posts.

It may look a like the spacing is a little odd for the joists but we actually placed our them such that it would make installing the railing posts and the decking easier. 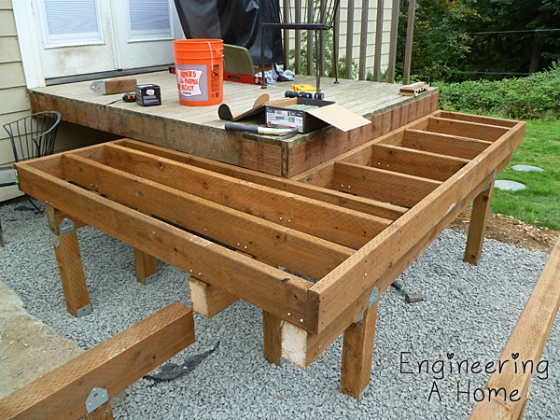 Once we put together the first level of joists we started on the second. Due to the shape of the main level of the deck we were able to sort of build it in two sections. To ensure that all our joists would be the same length we actually didn’t cut them first. We left them long and just attached them to the rim joist that is nearest to the house.

We set the rim joist on top of the beam since it was much easier to balance and nail all the joists that way. After all the joists were nailed on we slide everything back into place.

Then we measured, snapped a line, and trimmed off the extra length on the boards and attached the front rim joists. It was pretty exciting to get our first real view of what the finished deck is going to look like. You can mark it out but seeing the real size and shape is always different.

Since it was raining on and off I sort of wimped out at this point. From here Chris cut down chunks of blocking to nail in between the joists over each of the beams. 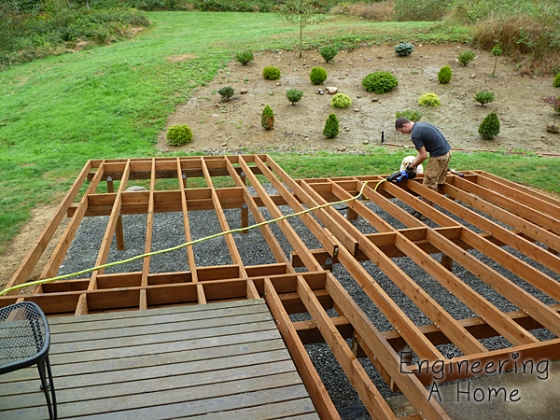 With the nearly consent rain has also forced us to do all our painting inside the garage. The first painting projects was all the railing posts.

At the recommendation of our local Miller Paint store we decided to go with an opaque stain from Storm Stain. The solid stain was not only a design decision but it also has 15 year warrant. Since we don’t want to repaint or re-stain every year the solid stain was the best choice for us.

With the blocking done and the railing being painted we started working on the stair risers. To start with we purchased a precut riser from Home Depot. When we brought it home Chris found out that it didn’t really work for our decking and deck height. Instead Chris figured out what the dimensions we needed were and drew a little sketch. 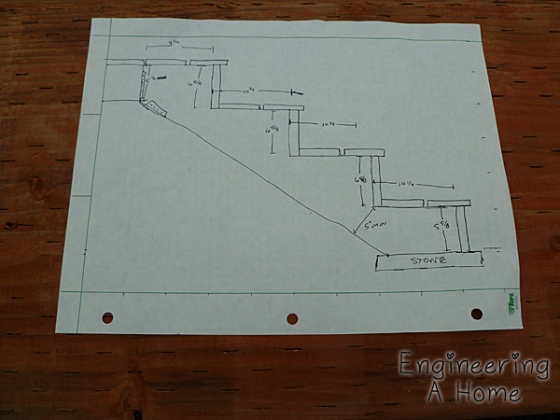 We bought some 1×12 pressure treated boards and marked the first riser based on Chris’ drawing.

After the first one was cut Chris then just traced around that to mark the next board and cut it as well.

To hold the railing posts and stairs up Chris dug two holes for concrete piers and used stringer hanging brackets to attach the stringers to the deck frame. 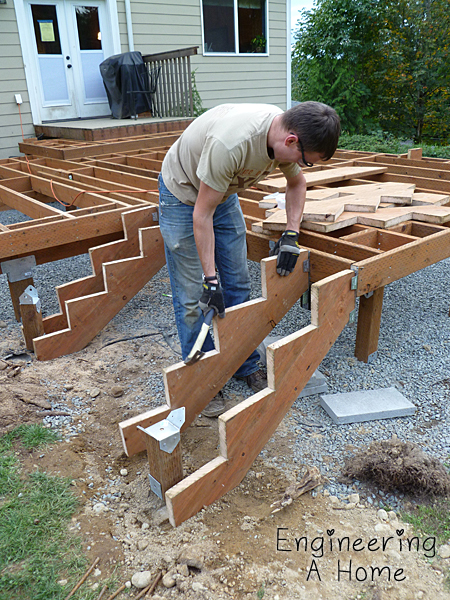 It’s a little hard to see in the photo below but Chris actually cut all but the two outside stringers 1 1/2″ shorter than we needed so that we could nail all the stringers onto one 2×4 board. 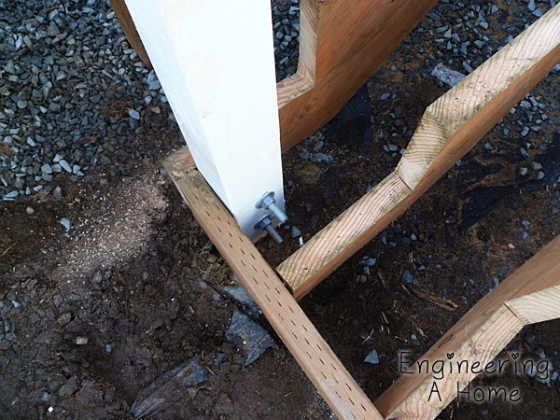 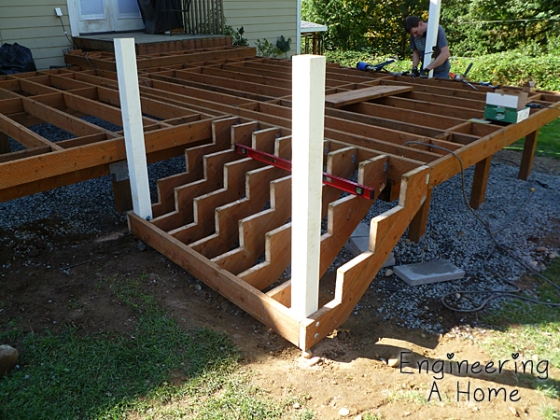 Once we had those first two posts installed we moved onto the posts around the rest of the deck. On pretty much every post we chose to do extra blocking to add even more strength to the railing posts.

After we installed a few more posts we were able to figure out a method that worked for us and it moved relativity quickly. We did however have a number of issues with breaking bit extenders to make the spade drill bit long enough to make it through all the wood. 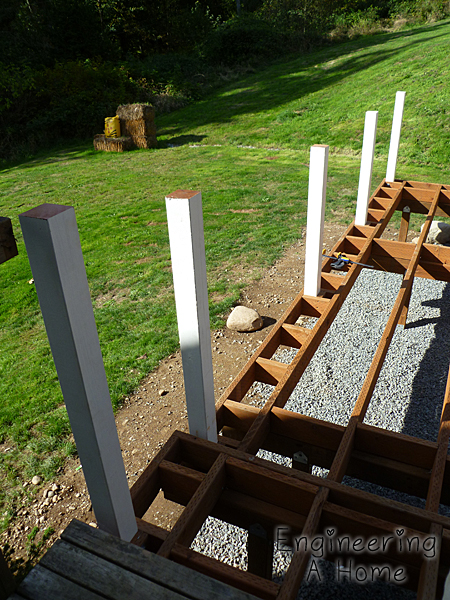 Another issue we had was that even though we thought we calculated right the 7 inch long carriage bolts didn’t work especially well through the railing posts and two 2×4 blocks. It made it pretty hard to tighten the carriage bolts down but we were able to do with with some coercing.

When we finished installing the posts on the main post of the deck Chris pulled all the deck boards off our current deck and added more blocking for the posts and to install our decking on. 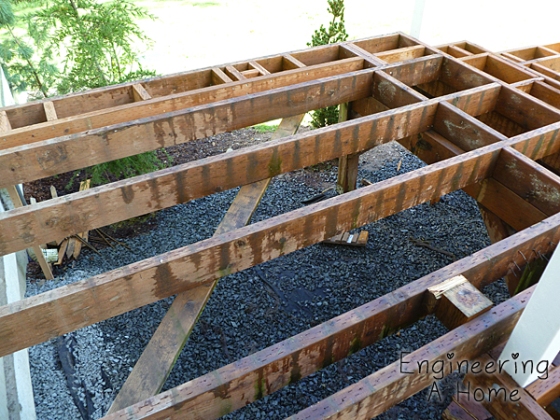 It was a lot more time consuming than we both were hoping but we were lucky enough to have clear enough skies to finish installing our posts last weekend so that we were ready for our second inspection scheduled for Tuesday. 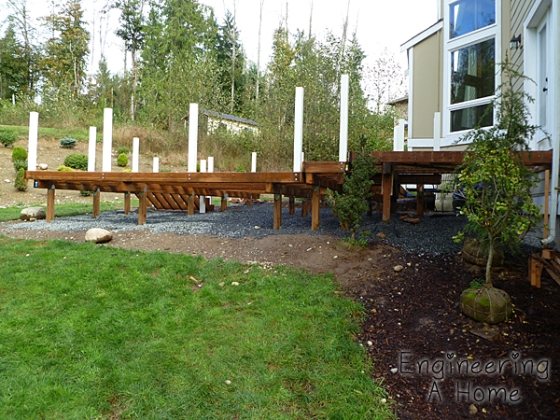 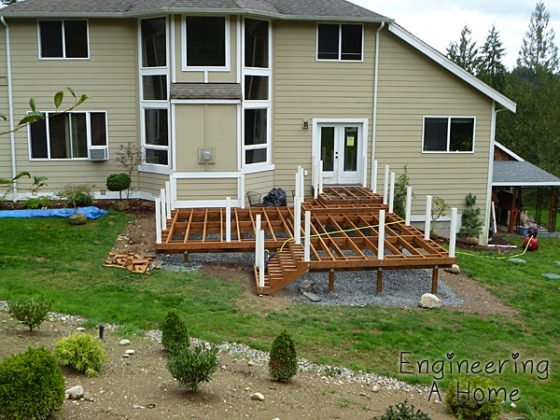 We decided to take off Tuesday to wait for the inspector and the lumber store to deliver our next load of materials. Unfortunately, it was somewhat of a wasted day since our inspector wasn’t even able to make it out to our house. He did come by Wednesday while we were at work and we passed!

It’s nice to have this much progress behind us but we know that installing the decking and railing will be pretty challenging and time consuming for us.

Want to catch up with the rest of the deck process? Up until now we have explained how we designed the deck. How we got our permit, prepped the ground, and dug our footing holes. After the holes were dug we poured concrete and put down landscape fabric and gravel. With the base completed we installed our posts and beams.

Update: Next up I talk about what decking material we chose.