It didn’t take us very long to move everything out of sewing room so that it could become the nursery. At the same time we started bringing in some of the items that we already had and that we’d purchased from Ikea. Chris was so excited to start putting things together that he wanted to do something. That something was adding some legs to our Ikea Expedit (Kallax) shelves that we already had.

My first idea with these shelves was to just sit them under the window for more storage. Then I realized that the heat register was right under the window so that wouldn’t work. I needed some way to get the shelves up off the floor. After a little internet searching I found that a number of people have added the Ikea Capita legs to these shelves. I bought the shortest legs they had which are supposed to be 4 3/8″ tall but I think with the brackets they are a little taller than that.

These legs come with a bracket/plate and a set of screws so they are pretty easy to install. Chris just grabbed an electric screw driver, predrilled the holes and then screwed them down with no problem. 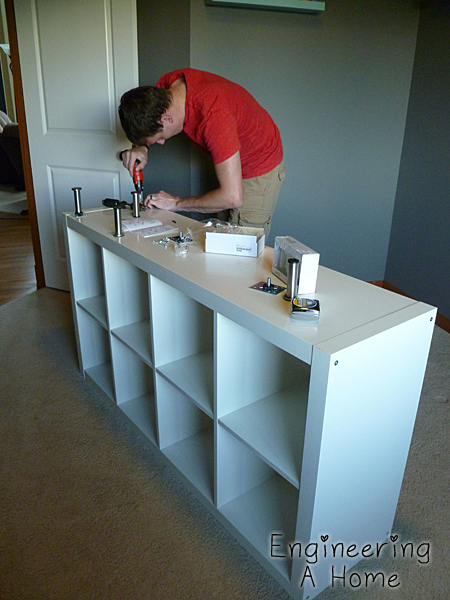 The brackets do have a little bent edge which fit well over the edge of the shelves where the sides are a little raised.

I have to say I was a little concerned with just drilling into these shelves since I know they are basically hollow or pressed fiber filled. I thought there wouldn’t be enough for the screw to grab onto. But once the legs were all screwed down I was surprised by how strong and sturdy they are.

It didn’t take Chris long at all to get all 6 legs on.

The shelves ended up sitting a little taller than I originally wanted but it worked out ok since they are pretty much even with the windowsill now.

Also while I was at Ikea I picked up a few new boxes to go in the shelves for storage.

Not much to it but there’s the first “project” completed for the nursery.