I feel like blogging comes in waves for me. Whenever I don’t post for a week or more it’s usually because not only are we busy but I’m also working on a bunch of projects. That being said I have so much fun stuff to share that I’m really proud of.

But before we get to any of that I have an exciting future project to share. We are building a deck!

Chris and I (mostly Chris) have been planning out what we want to do with out backyard and working on ideas for a new deck. If you remember photos of our backyard you know that the deck we have currently is almost laughably small.  It’s really only big enough to use as stairs to get out of the back of the house.

Originally our plan (or Chris’ rather) was not even to build a deck until later. He was really hoping to work on an in ground sprinkler system this summer. Once he got to thinking about it he really wanted to build the deck first so he knew what he was working with when installing sprinklers.

Thus started the looking at, planning, and of course pinning of deck ideas.

After doing a little research we realized that we would need to get a permit to build our deck. In our county if your deck is more than 30 inches above grade within 6 feet of lateral distance it requires a permit to build.

Unfortunately it wasn’t an easy process for us to get a permit and since we had no idea what we were doing it took us a while to figure it all out.

Months ago we started sketching out ideas and Chris started using some of the free online deck builders to get an idea of what we wanted. From there we went outside and staked out the perimeter of the deck we wanted.

I’m so glad we did this. It didn’t change our plan drastically but it did help us tweak it and finalize a design we were pretty happy with.

It was great to be able to see how the deck would fit in with the shape of the yard. Since our yard slopes and changes depth we wanted to make the most of the space without taking over the whole yard.

For an easier build we also decided to basically add on to the deck that we currently have. Of course we’ll installed new decking, remove the stairs and change the railing to fit in with the new deck.

With our appointment scheduled it was time to kick our planning into high gear. Chris had already spent many weeks pouring over tip sheets, documents and county websites. Now we had to some how figure out what to do with it all and what we actually needed to get a permit.

Having heard about John from Young House Love‘s experience we really hoped that just a few sketches and maybe a print out from the Lowe’s deck builder would be good enough.

Well lets just say that we were in fact wrong. We ended up needing quite a bit more information. We left our appointment with homework to go fill in all the gaps in our plan. We basically had to go back and redraw everything in detail. We were required to show detail views of everything from post and beam connections to stairs and railings. As well as add explanations of exactly which brackets and what types of wood we would be using.

After hours more of work and a several more trips to Home Depot we finally got our act together and sent our permit reviewer a whole new packet of information. Below are just a few of the hand drawings we did. We also had several pages of detail views that we copied from codes and tip sheets online.

Once that was sent in we just had to hope it was good enough.

Luckily this time it was!

So many hours of work, a lot of stress and $282.88 (yes that’s what our permit cost) later and we can now officially start work on our new deck.

Has anyone else had experience getting a building permit? What was it like for you?

Today we are actually moving off the porch and down to the front walkway.

I found this plan for a planter on Ana White’s website and I thought it would be a nice addition to our front walk area.

We ended up deciding to make three boxes since we already had some plants in mind to put in them. Instead of making them all at once we finished the first one all the way through to see how it went. Then we started from the beginning to make the last two at the same time.

First we cut all legs and boards for the sides to size.

Then we sanded. Since the cedar fence boards are so rough they take a long time to sand down. I’m pretty sure the sanding was the longest step of the process. It was worth it however since it made the boards look so much nicer.

Then we just followed the rest of Ana White’s plan and we started assembling all the sides. To make sure that they were all the same height we used two squares to line up the 1×3 boards for the top and bottom.

We don’t always use glue when we build but this time around we decided to for the added strength.

Then we just centered the cedar fence boards on the top and bottom boards. We pre-drilled and screwed everything together using a 1-1/4″ exterior screw.

You can really tell the difference between the non-sand side above and the sanded side below. Here’s a pile of a bunch of the sides assembled and ready to go. 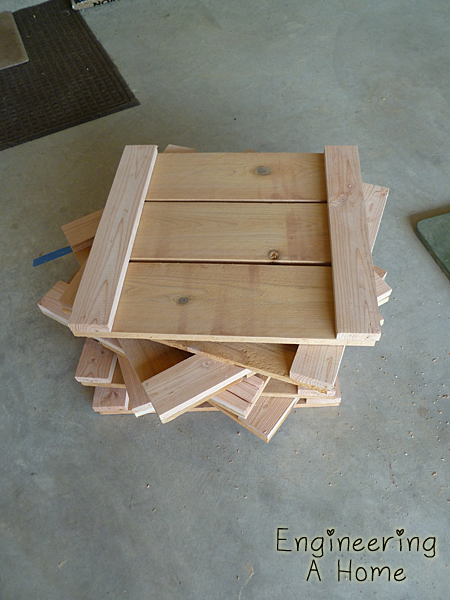 Once the sides were assembled Chris used the Kreg to drill two pocket holes on each side of the top and bottom into the ends of the 1×3 boards. 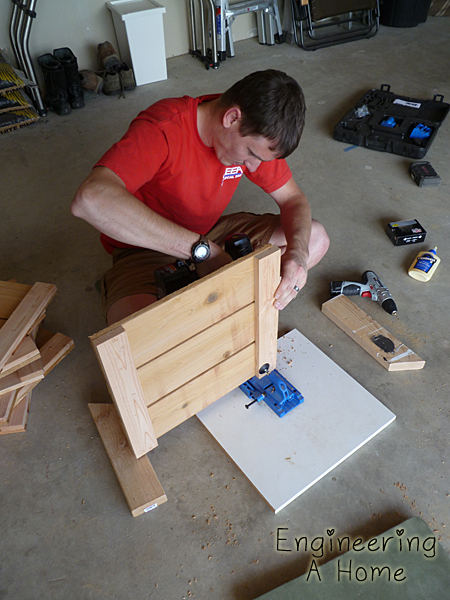 Then using the pocket holes we attached the 2×2 corner legs to half of the sides that were already built. 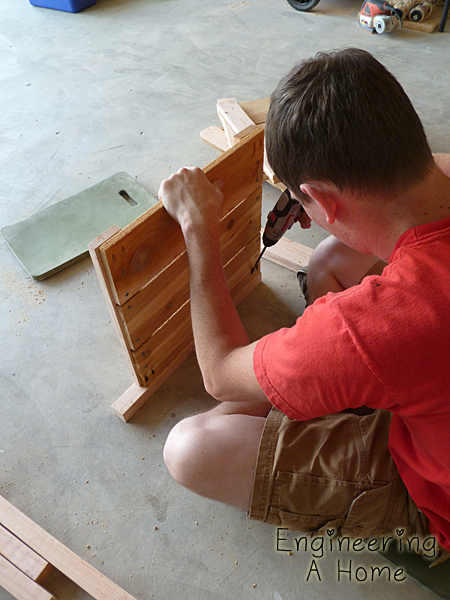 Once we were down half the of the sides panels now looked like this.

We lined up the leg boards so that the were flush with the top and bottom 1×3 from the front.

With half of the sides attached to the corners we then attached the remaining sides to them to create a box.

It’s a little tight attaching the last side but it’s not too bad.

Since we figured out what we were doing the first time around the last two planters went together pretty fast.

From here we deviated from the plans just a little and followed one of the brag posts instead. We decided we liked the more finished look of the planters that had a 1×3 topper on them instead of the legs just sticking out of the top. We measured the planters individually for the topper boards. The toppers were then glued and nailed in place with our nail gun.

At first we were going to miter the corners but we have a really hard time getting a good miter with our miter saw. Ultimately we thought it looked better to just use straight cuts.

Once the topper was on we measured our plants and chose were to screw in our cleats in the middle of the boxes. 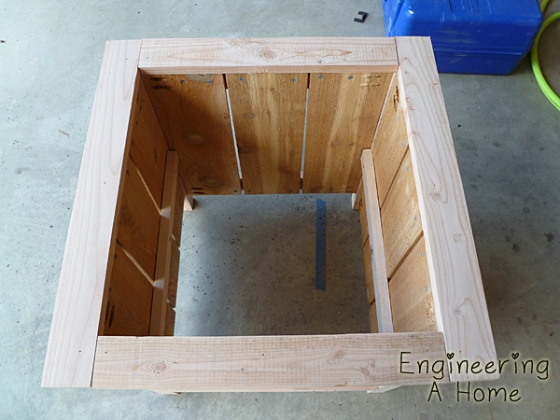 Then we used some scrap wood to create rails for the bottom to support the plants and all the soil.

Here’s the boxes all ready to go. Don’t they look pretty? 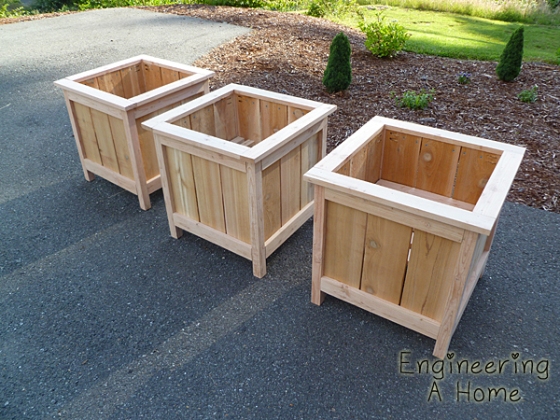 Of course we were too excited at this point to not see what the plants would look like inside the pots.

I forgot to take pictures of the next step but we actually used Thompson Water Seal to seal the planters because we were worried about all the weather and water and we wanted them to last. We thought that it would be a clear seal but it actually did make the boxes a bit darker. I think we liked them better before but they don’t look bad now, just a little darker.

After the sealer dried for 48 hours we moved on to actually planting. To keep the soil from falling out of all the cracks we stapled weed block on the inside of the pots. 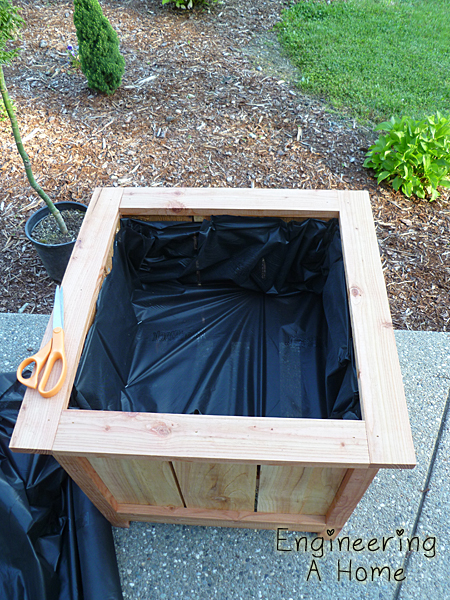 Once the boxes were covered with the weed block we dropped in the soil and started planting.

The boxes ended up being bigger then we expected so we bought a few little bright flowers to put in around the edges for fun and a little more color. 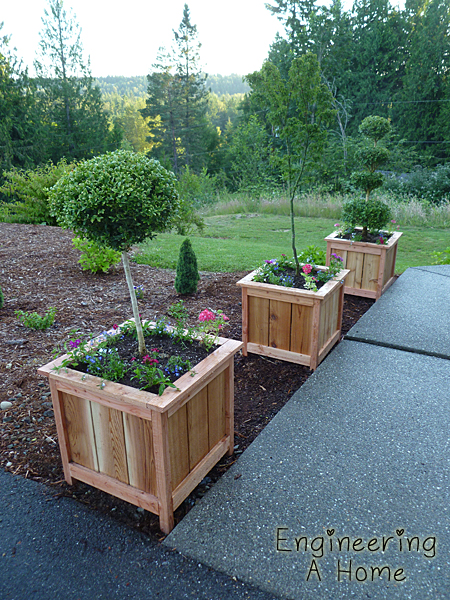 I love the way they turned out. They look so expensive and fancy. 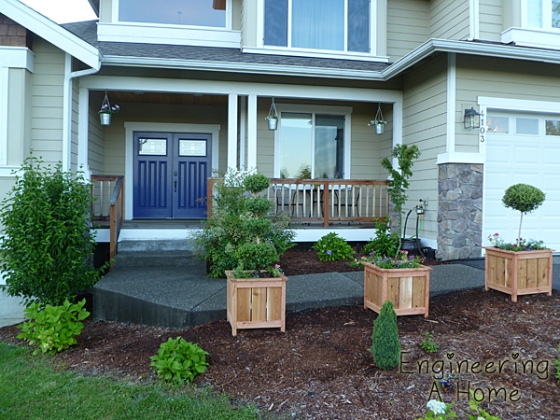 Even though they look expensive they actually ended up being pretty inexpensive, especially compared to buying a box this size at a garden center.

Here’s a breakdown of our costs for all three 20″x20″ planters (soil and plants not included):

They are a nice little addition to our walkway. Finally the front is looking a lot less bare and a lot more finished.

Has anyone else been making diy planters for your yard this summer?

For a while now Chris has been talking about planting some trees along the back of our yard.  In honor of Earth Day our work gave away tree seedlings last week and Chris and I collected 9 trees; 4 douglas fir and 5 noble.

The back of our property pretty much ends before any of the trees that can be seen in the photo below. Chris took the opportunity of the free trees to try to fill in some of the landscape. It will take a while but many years from now there may be a little fuller view in the back. 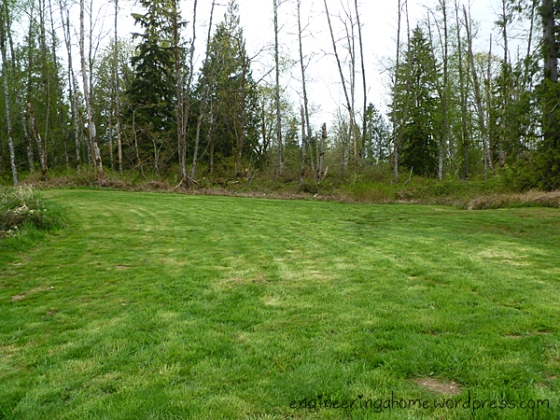 While I was busy inside the house Chris went out last weekend and planted the trees. Below is a picture of each tree taken from left to right as in the view from the picture above. 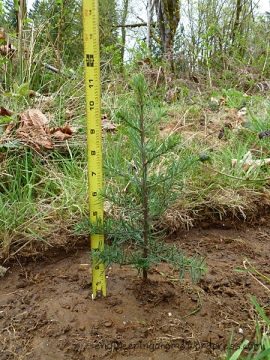 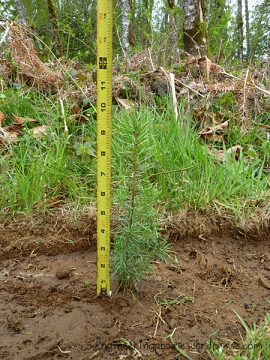 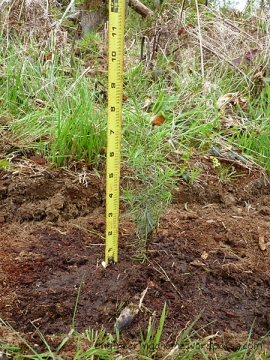 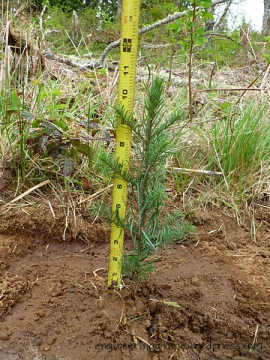 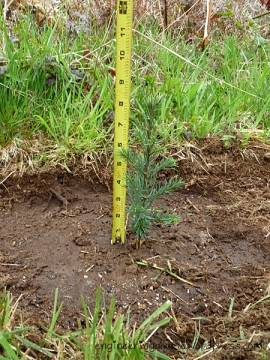 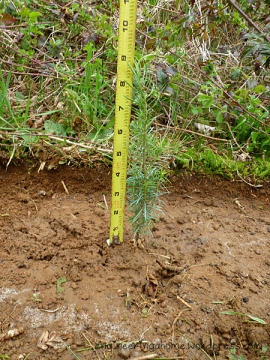 So there they all are. Hopefully they will last through the year and we can measure them again next year. It will be interesting to see how they do and hopefully many years from now we can enjoy some tall evergreen trees that Chris planted himself. 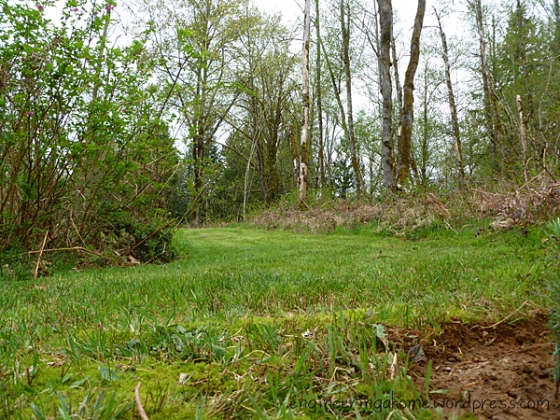 Anyone else plant some trees for Earth Day?